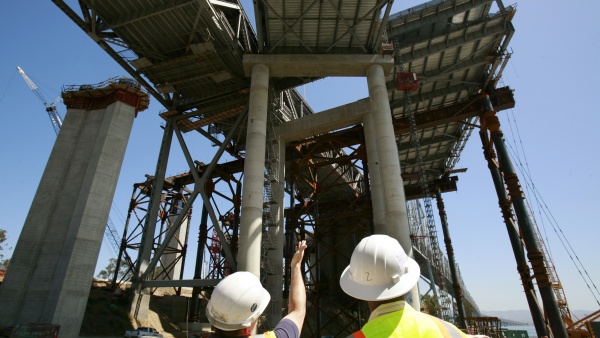 Lives depend on passage of HB3823

BY NOW, the problems are well-documented: More Illinois roads and bridges are falling
into disrepair, and the state’s financial straits have left less money on the table to address
the growing list of infrastructure deficiencies.
Voters took a crucial first step toward addressing the situation when they passed in 2016 the
Safe Roads constitutional amendment mandating all money raised to fund transportation
actually be used for that purpose. The so-called lockbox has stopped the state’s practice of
raiding transportation funds to plug budget holes elsewhere, but it hasn’t addressed the fact
that the state has been underfunding infrastructure needs for far too long.
In its 2018 Illinois Infrastructure Report Card, the American Society of Civil Engineers
identified an estimated $10 billion in needed bridge repairs alone. Compare that with the
$2.6 billion in bridge maintenance funding to be spent over six years identified by the
Illinois Department of Transportation’s latest Multi-Year Plan (FY2018-2023), and you
have a disaster in the making.
Only two states have more than Illinois’ 26,775 bridges, of which ASCE reported 8.6% —
2,303 — are structurally deficient. With millions of vehicles crossing these spans each day, it
no longer is a matter of whether tragedy will strike. Without a solution, it’s inevitable, and in
addition to the billions of dollars to repair and rebuild, it will cost human lives.
Compounding the problem is that FY2018-2023 MYP reduces more than $1 billion in
available funding over the life of the plan. Meanwhile, roads continue to deteriorate, and
ASCE estimates drivers will pay $4.8 billion in annual repairs to vehicles driven on those
roads.
This leaves two questions: One, how can the needed repairs be paid for, and two, how soon
can this happen?
Enter the Illinois Chamber of Commerce, which is backing a bill introduced by state Rep.
Andre M. Thapedi, D-Chicago, to raise $2 billion in annual revenue for transportation
funding.
HB 3823 would eliminate the state’s sales tax on gasoline, a tax that is charged on top of the
state’s gas tax, and raise the gas tax by 15 cents. Eliminating the tax on a tax stands to save
drivers money as the price of gasoline — and the total paid to fill a tank — increases. The bill
also would get rid of the Commercial Distribution Fee, a key move to keep the trucking
industry from being hurt by the increase in the gas tax.
In addition, the measure would direct the secretary of state to develop tiered registration
fees for cars based on the model year of the vehicle. This would allow people who drive older
vehicles, who may drive less or have lower incomes, to pay less to register their automobiles.
It also puts Illinois in line with states such as Iowa, Missouri and Michigan, which already
have tiered registration.
This revenue is critical for state infrastructure. The Illinois Department of Transportation
would see an increase of $600 million in funding, and $240 million would be allocated to
local governments, a 40% increase. Transit programs would receive $670 million.
Perhaps most importantly, HB 3823 would bond $4 billion in funding for IDOT to allow
desperately needed work to begin immediately to address a situation that is becoming more
dire by the day.
The timing of this measure is crucial. Further delays in funding now will leave fewer days to work this construction season and will lead to increased costs as the price of materials and labor climbs over time.
That the Illinois Chamber of Commerce has taken an active role in a tax increase signifies its importance.
“We do not take tax increases lightly,” said Illinois Chamber of Commerce President and CEO Todd Maisch. “If no significant investment is made in state transportation funding, nearly 40% of road miles and 20% of bridges will be in unacceptable condition by 2022.”
This measure will not address the entire gap created by politicians dipping into transportation funding for other needs, but it would be an important first step. And the Safe Roads amendment will keep the money where it needs to be.
The bill now is in the House Rules Committee, where negotiations are ongoing. Should the bill make it out of committee, it is our hope that lawmakers will see its benefits, recognize the efforts made to accommodate businesses and ultimately support passage.
The lives of drivers and passengers on our highways and bridges depend on it.